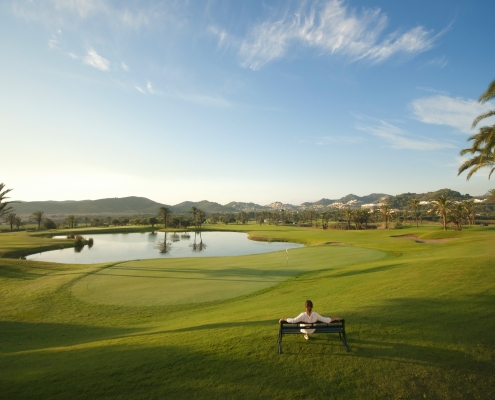 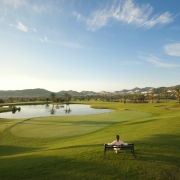 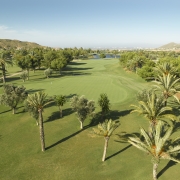 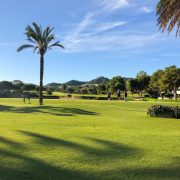 South Course
The Championship course at La Manga Club, the South, is probably one of the fairest tests of golf one can find. At 6,499 metres from the White Tees, whilst being accepted as a top-calibre tournament course, it also provides a thorough test both for the scratch player and right across the handicap range. The South Course has been the venue for many major professional tournaments including Spanish Opens (both ladies’ and men’s), PGA Championships and Qualifying Schools for both the men’s and ladies’ European Tours

Slightly shorter than the South, with tighter fairways and larger greens, the North Course offers a different, yet no less challenging, round of golf. A feature of the greens, all built to USGA specification, is the amount of movement incorporated in them, none more so than the short Par 3, 2nd, which has three distinct plateaux – a great test of putting. Relying on precision rather than length, an added challenge is provided by the wide variety of water hazards and ‘barrancas’ that snake their way through the course.

The West is many golfers’ favourite, both because of its unique setting and outstanding views and because of the challenge offered by its narrow fairways, frequent blind shots and the gullies which snake through the course. The breathtaking views, undulating fairways and fast greens make this course particularly exciting to play. Unlike a lot of courses, having played here, golfers feel that every facet of their game has been tested to the full.

La Manga is a true golfers paradise with three championship courses on site. Many groups choose to stay on site at either the 5* Hotels or their fabulous apartments and then play a combination of courses for a perfect golf break. Golfers always come back beaming from ear to ear after visiting La Manga