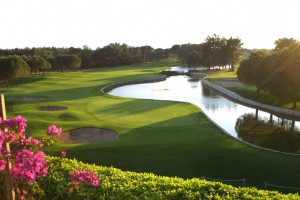 It has been established to provide exclusive facilities for both members and visitors. Carved through a forest of eucalyptus and pine trees with the back-drop of the snow capped Taurus mountains and an abundance of natural lakes, the National will test players of all abilities.

At the National, the 18 hole Championship Course is 6232 meters, par 72 and designed by Ryder Cup Player David Feherty, has played host to the PGA European Turkish Seniors Open in 1996 and 1997. David Feherty has incorporated aspects of the best courses he has competed on in the world, and has ensured that no two holes are similar.

The National thanks to David Jones, Senior Player, whom leading his consultancy since the beginning of the National to improve the conditions and design of the course.

National offers something special for all levels of golfer. For those just starting out there is a professional team of highly trained PGA Pros who will look after your swing. Following your lesson or game of golf, you can take advantage of 40 bay Driving Range, 2 chipping and putting greens and practice bunker. National also have a superb 9 hole Academy Course which suits any standard of golfer, with its wide tree lined holes and water coming into play on several of the tee shots. It can also be an excellent warm-up before your round on the Championship Course.

At National Golf Academy, Antalya, where a comprehensive instruction facility which caters for all golfers, from the scratch player to the complete beginner, is offered and a range of tuition from half hour lessons to week long instruction programmes , is available.

After your game why not come and spend some time relaxing and soaking up the true beauty of the area in one of the restaurants. The Meridiana restaurant offers a selection of international cuisine along with true Turkish hospitality. The Park restaurant is situated adjacent to the 18th hole, overlooking the lake, offers surroundings of unequaled beauty.