Within the natural amphitheatre of the Bay of Lagos, Robert Trent Jones II has fashioned Europe’s next great golf course, Onyria Palmares Golf. The brief given to this exceptional American golf course designer was to craft a 27-hole golf course which maximised the potential of its extraordinary environment. The result is a golf course of breathtaking natural beauty which is a delight to play. The course opened 18 holes for play in October 2010 and the full 27 last June 2011 and it has matured nicely.

Robert Trent Jones II designed the golf course with the highest level of international tournament golf in mind as well as a pleasurable golf experience for members and tourists alike. There is plenty of challenge, if that’s what you want – especially from the white tees! Onyria Palmares Golf is composed of three returning nine-hole loops that can be played in any sequence. The genius in the routing is that, depending on the sequence of play, each golf experience is different. Each nine-hole loop – Alvor, Lagos and Praia – has its own character and ambience.

Located primarily on the northern part of the site, the Alvor Course has a parkland character with mature trees and lovely views of the Monchique hills. Changes in elevation are integral to the design of this nine as a majority of the golf holes ascend hillsides or descend through intimate valleys. The parkland setting disappears briefly with a series of holes with more expansive views. A preview of the dunes and links holes to come is provided in the sixth and seventh holes. As the round concludes, the course again assumes the parkland character.

The Lagos Course begins with the same parkland character. This course incorporates the only two lakes found on the entire site at the short par-3 third hole and the long par-4 sixth hole. Holes seven and eight immerse golfers into the expansive dune lands on the southwestern portion of the site. The round concludes with a climb to the clubhouse and back into a more parkland setting.

The third nine at Palmares presents the golf experience every great designer dreams of having the privilege to create: a seaside landscape with dunes exposed to the elements. The four seaside holes are between the beach and the railway line. The course opens by descending from a parkland setting. The second hole then whisks golfers into the true links part of the course. This dunes character is continued through the remainder of the Praia Golf Course with the closing hole, a strong uphill par-5, rising up out of the dunes through a deep valley to an amphitheatre just below the clubhouse. 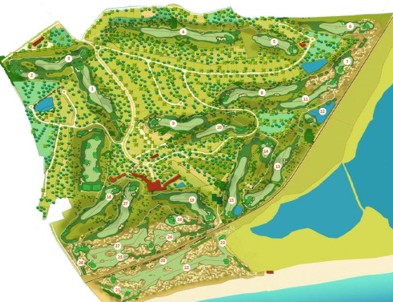