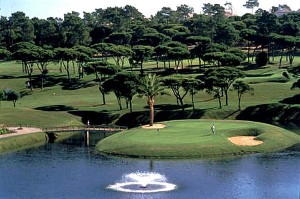 Pinheiros Altos is established as one of the most prestigious and successful premier golf and leisure resorts in Europe, and owns a 27 hole Championship golf course.

The original 18 holes were designed by the respected American architect Ronald Fream and the additional 9 holes, created by the highly regarded Portuguese golf architect George Santana da Silva, opened in 2007.

The 27 hole Championship Pinheiros Altos Golf is presented in three contrasting nine hole formats. Each nine holes is a PAR 36 and named:

The Pines (Pinheiros)
The Corks (Sobreiros)
The Olives (Oliveiras)

All nine holes have their starting and finishing points in close proximity to the beautiful Pinheiros Altos Clubhouse. Each hole has four starting tees: The white and yellow tees represent the championship and medal tees respectively for the men, the red and blue tees for the ladies.
Firm, Fast and Testing Greens

The firm, fast and testing greens, sown with Pentcross Bent and combined with the Bermuda fairway grass, provide resilient and excellent surfaces on which to play golf and make Pinheiros Altos a must play course when visiting the Algarve.The 27 championship holes at the Pinheiros Altos Resort are presented in three nine holes formats.

The Pinheiros Altos Pines Course (Pinheiros) is named after the abundance of pine trees which abound the course, this nine includes four of the new holes opened in January 2007 and five of the original front nine. One thousand additional pine trees were planted to blend the new with old.

The Corks Course (Sobreiros) is the longer of the three nine holes at Pinheiros Altos and regarded as the most demanding, especially due to the difficulty of the eighth hole.

The Olives Course was the original back nine and has remained unchanged since the island green eighth hole was constructed in 1995 and has one of the golf courses signatures holes.