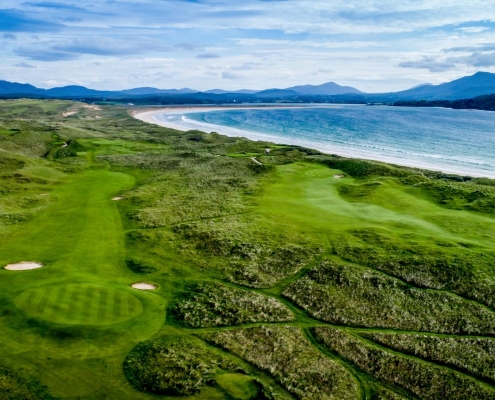 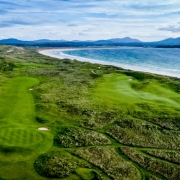 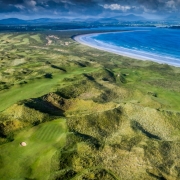 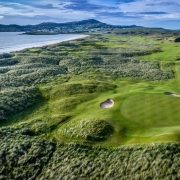 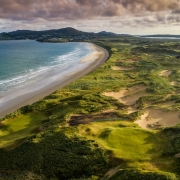 Golfers have been travelling to Rosapenna since the late 19th century when the Old Tom Morris Links was ranked 3rd in the British Isles behind only The Old Course at St.Andrews and The Royal County Down Golf Club. With the addition of the hotel soon after the Old Tom Morris Links opened in 1893 Rosapenna is the true first golf resort in the world.

In September 2009 the new Strand Nine opened at Rosapenna to replace the original back nine which played across the main road on a number of holes. These new links holes which are now played as the front nine are routed through the low lying dunes to the east of the Sandy Hills Links and are fashioned much like the original Old Tom Morris Valley nine that runs along the beautiful Tramore beach overlooking Sheephaven Bay which have now become the back nine. Laid out by Pat Ruddy of the European Club these new links holes, which have striking views across Mulroy Bay, have matured to a condition that has seen them settle into the Old Tom Morris Links layout to provide a seamless connection between each nine.

The original back nine of the Old Links known as the “Coastguard Holes” are now played as a separate nine hole course beginning and finishing at the practice ground. Running to just under 7,000 yards off the championship markers the Strand and Valley nines which now make up the Old Tom Morris Links are a testing combination of traditional and modern links holes which bridge a century of golf design influences.

he Sandy Hills Links at Rosapenna opened for play in June 2003 and has matured into one of Ireland’s finest modern links courses. Where Old Tom settled for a course alongside the dunes, Pat Ruddy has gone straight through them from start to finish and created an awesome course that will test any golfer, yet somehow still seduce those that cannot live with it. Each hole is spectacular and the views across the Old Tom Morris Links toward the beautiful Sheephaven Bay will salve any wounds inflicted by this incredible golf course.

Sandy Hills is in many ways the ideal of a modern links. Intended for the serious golfer, its narrow fairways appear constricting from the tee, but the landing areas sculpted from the dunes are deceptively wide. Measuring a hefty 7,255 yards from the tips, Sandy Hills was designed with championship play in mind. However don’t allow this to deter you, with a multiplicity of tees there is a length to suit all strengths.

These two stunning, championship links courses are located in one of the most scenic parts of County Donegal, A visually spectacular course with some great views of the Sheephaven Bay it gives you a real feel for the special place that is Rosapenna. But don’t let the views fool you, this course is a beast and will swallow you up if you’re not careful.