The Front 9 with Paul Dunne

You are here: Home1 / The Front 9 with Paul Dunne

The Front 9 with Paul Dunne

Last July the world learned something the whole of Greystones has know for over ten years. Paul Dunne was very good at Golf. Since that magical week in St Andrews he’s won his European Tour card and enjoyed success on the PGA tour. So its fair to say the future is bright.

When you heard stories about Paul, they were always of hard work, talent and discipline. I don’t know how many times I’d heard of “Dunner” being on the putting green for up to six hours or how the Greenkeepers would arrive in the morning only to see him picking up balls he’d already hit.

He embraced golf fitness well before it became trendy. Whatever he could do to get better he did and its great to see him out there on Tour reaping his rewards.

I know for me and my circle of friends every time he tees it up it feels like a major. And the great thing is we have a lot of majors to come !

Earlier this week Paul agreed to answer a few questions for my Blog. I could have asked him hundreds of questions but decided to make it nice and easy for both of us. So we are going to have a front nine and back nine of questions with the back nine coming towards the end of the season. 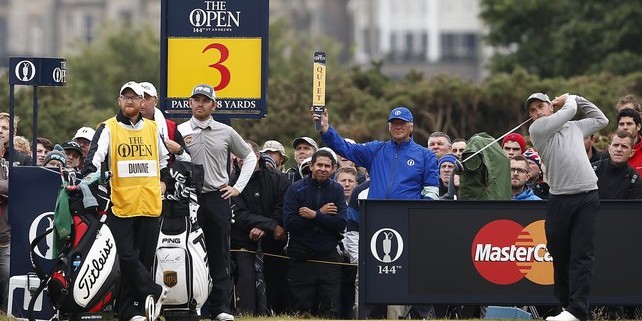 The Front 9
1) From what I’ve heard you could have played at a very high level in a few different sports from Tennis to Soccer. Can you remember what shot or competition it was that made you throw all your eggs into one basket and focus purely on Golf?

“I played a lot of football, Gaelic football and tennis when I was younger. I played them to a decent standard but I was streets away from the best. I started golf at 10 and as I got older the appeal to me was that you could practice, play and improve with others and by yourself. In other sports you need other people to play with to improve but in golf you can put the work in whenever you feel like it and can always do something to get better. I think I started focusing mainly on golf at around 14 when I started making national teams. I was playing with the best in the country and thought I could beat them which gave me a lot of motivation to keep moving up through the ranks”

2) You’ve played at the highest level of Amateur Golf. How big has the step up to the paid ranks been standard wise?

“Not as big as people would think. I would say that top level amateur golf is as good a standard as the European Tour. However, the European Tours fields are much deeper. The best players in amateur golf will have no problem competing and doing well on tour, the only issue is doing it at the right time when the opportunity arises”

3) If you had to swap one part of your game with any player on tour right now, who and what would it be?

“I think I’d take Dustin Johnson’s club head speed. I know I can improve all areas of my game myself but it’s very difficult to increase the speed in your swing. I will pick up some mph’s as I develop but will never get into the 130’s with swing speed like DJ so I’d have to go for that”

“Hold your posture through impact and “stay in the shot.” But to be honest I usually have a few”

5) What’s playing in your earphones at the moment in the gym or while
your out jogging?

6) Do you have a motivational speaker or book you check in with regularly?

“Unfortunately the only one that works is the one between the ears. If there was a secret motivational video everyone would have used it”

7) Describe your average Tuesday the week of a tour event.

“It depends if I’m in the Wednesday Pro-am. If I am then I will get to the course around 10ish. I like sleeping in a bit and resting on days leading up to an event. Sleep is so important I’ll play 9, grab some lunch, and then do some work on the range and a couple hours of short game, mostly putting. If I’m not in the pro am on Wednesday then I don’t get to play the course Wednesday and will play the other 9 after lunch on Tuesday”

8) Your teeing off at 10:00am on a Thursday what does your morning consist of?

“Alarm for 7:20 and then get up after a few snoozes. Grab some breakfast, some light stretching/foam rolling, a shower then head to the course. Get there an hour a 10 minutes early. I do approx 15 minutes putting from inside 15 feet, then head to the range and work up through the bag for half an hour. Afterwards I do about 10 minutes on the chipping green then do some work on long range lag putting before heading to the first tee”

9) Your short game practice routines are legendary around the Greystones area. Could you give one drill you’d recommend for the average player to use?

“Par 2’s is the best game to play. It’s most like practising as you play. Set 18 holes out around the chipping green, 6 easy, 6 medium and 6 hard and try get them up and down and see how many over you are after 18. If you can go round in level par then you can say to yourself that if you miss every green on the course you can still shoot level par. We did this game in college with Alan Murray about 4 times a week. Put some effort in and you’ll get a lot out of it”