The Irish Open Pro Am – Part 1

Its funny how certain phone calls can affect you in different ways. Two I’ll mention are both about the same place, The K Club. One of Ireland’s top resorts, a place I’ve had the pleasure of being to on numerous occasions.

The first phone call came way back in 1997, I’d just spent three days inside the ropes  caddying for Irish Professional Brendan McGovern in The European Open, a pretty big deal for a fresh faced 17 year old who thought he knew it all about golf. I was quickly brought back to earth when Retief Goosen’s caddy gave me an crash course on how “you rake a bunker on tour”

Brendan was playing as I mentioned with Retief and a Dutch player called Rolf Muntz, One would go on to win Majors and millions of Dollars, one not so much.

The first round from what I can remember Brendan shot a really classy 71 and eclipsed the two superstars and I think he was leading Irishman in the field, so I must have been doing a half decent job carrying the bag and cleaning his balls !

Second day was a bit of a disaster and as caddies say “we missed the cut by a couple of shots”. I headed back home to Greystones looking forward to the weekend in Lautrex (local nightclub) with a few pound in my pocket.

Late that night the phone rang in my family home, I answered, “Mr Lawless do you accept the charges of a call from a Mr Brendan McGovern from The K Club”

I’d only ever seen this in Movies. But obviously accepted the charges, Brendan asked me did I fancy coming back down at 0600 hours the next morning, he’d got a chance to play again as a marker.

The thoughts of getting a train and two buses back down didn’t really appeal to me so I kindly declined the offer and haven’t spoken to Brendan since. I still tell people that story today, nearly twenty years later.

The second phone call I got about The K Club had the polar opposite effect on me. It was a busy Tuesday afternoon in work, when my mobile rang. And it was one of those calls will I wont I answer numbers you don’t recognize, but thank god I did,

“Hi Rob, Its Kieran from Vocal here, I’m ringing on behalf of BMW”

The Penny dropped… A few weeks previous I had seen a viral video on line, Paul Mc Ginley asking “Are you Ireland’s most driven golfer?”

Immediately I thought YES I AM PAUL. First time I tried to enter my brain wouldn’t work and out of the 500 words you needed to write I could only muster up maybe ten, second time I actually got some good content together but their platform wouldn’t work and it wouldn’t allow me upload the photo or video.

I tried again a few days later, third time lucky, it all worked nicely and I sent it off, quietly confident but never really expecting the call.

“Rob, we are wondering are you free next Wednesday to play in the Irish Open Pro Am as a guest of BMW”

Kieran, it would be my pleasure!

The rush I got was incredible, it was the most bizarre feeling. I just wanted to tell everybody. I remember running around the golf club just shouting out at anyone that would listen “I’m playing in the pro am” over and over again,

After I’d made phone calls to family and friends I posted it on Facebook, thinking my golfing buddies will appreciate this. It blew up. My phone never stopped beeping for days after. I even had  a few media sources wanting to do interviews with me

When I got home that night I got roped into doing one for The Greystones Guide, thinking it was just going to be a quick picture and a few small questions, Even if you watch the clip you can see me looking quite puzzled as I think he’s taking a picture when the sneaky devil is recording. Seven minutes later he finally pressed stop.

Turned out well and the response was so amazing. Incredible the support I got. Deep down I knew it was only the Pro Am and not the actual event, I don’t think everyone else did though!

So I had nine days to the event and six days before I found out who I’d be playing with. Day dreams of Rory and Padraig raced around my head, How was I was suppose to sleep! Monday morning came in a flash, I’d been up since the crack of dawn most mornings trying to get a half decent swing for that first tee shot on the Wednesday. I got back into the shop and there it was, the golden ticket. A registered letter from BMW with all my details.

I wont lie, I was a little deflated when I heard I was playing with Michael Hoey, I just knew he wasn’t a box office name, and people would think “Who” when they heard it. I quickly snapped out of that when I remembered what an incredible career this guy is having and it was a honour that I was allowed walk around a golf course with him. He’d won the British Amateur, five events on tour, beaten Rory down the stretch at St Andrews and most of all, I’d heard he was a great guy. This was going to be fun. 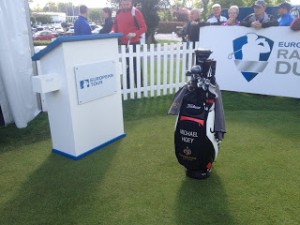 It was quite Ironic that I won a competition run by BMW considering I don’t drive. As it turned out my good friend Kenny who kindly said he’d come and keep me company and caddy for me on the day doesn’t drive either, step in my saviour Brian Downs of Joe Duffy BMW who provided us with a driver and car for the day!

So the day finally arrived (thank god says you if you’ve even read this far), the clubs have never been as clean, new trousers, new top kindly sponsored by work, tour bag packed to the brim with fruit, drinks, tees, golf balls. Poor Kenny nearly dislocated his shoulder when he first lifted it.

So our pick up was 0930, for a 1410 tee, you can tell we were eager to get down to the venue to have a nose around. Gerry our driver was a gent and tried to drop us right to the door but we were greeted by security on the main gate who sent us miles off course and I had to lump the bag about three kilometres, I could feel Kenny’s pain, the bag weighed a tonne. He’d just lost his tip though not offering to carrying it.

Finally a buggy spotted us and we were on our way to the clubhouse, we picked up one straggler on the way. As soon as he got in beside me I knew I recognized him. Eventually I realized it was non other than Michael Bannon, Rory McIlroys coach.

“How’s he hitting it” I said without even flinching. I just wanted to fit in you know! “Hitting it great, just needs to hole a few putts”, and we all know how that worked out.

We got to the registration about 1030,  done the necessary, then headed to the locker rooms….. We’d got dodgy directions! I was looking around going, yep I know him, him, him.. Kenny turns to me and says Rob I don’t think this is right, but hey when in Rome, I turn to the attendant and ask for a locker key.

“Of course Sir, your name”

Panic ensues as I’m not on the list and he apologizes but eventually gets me a key. But after lacing our shoes up and then getting the strangest looks from numerous Tour Professional stars we realized maybe we weren’t meant to be in their locker room. So red faced we quietly left and found the locker room reserved for Pro Am Participants. It was nice to see how the other half lived all the same.

We then availed of the free breakfast on offer. Trying to get the breakfast to sink in with everything else going on wasn’t easy. We ate fast because we really wanted to take advantage of our access all areas passes. 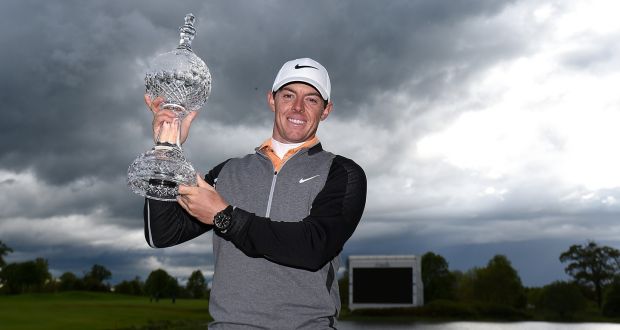 We left the dinning area and the first people we bumped into where two other Greystones Legends, Karl Holmes and Paul Dunne. Paul really looked the part, Karl not so much. Great just shooting the breeze for a minute with them, Karl giving out because we didn’t give him a lift from the gate, if only he knew.

We noticed right beside us was the first tee, and a nice little seating area. We sat for a while and watched Matthew Fitzpatrick and GMac stripe one down the middle. Something I was hoping to do a few hours later.

My phone then started to vibrate.

“Hi Rob, Its Shauna from BMW. Just wondering are you guys here?”

“Okay brilliant could you come over to the registration area and meet all the crew.”

This is when all the fun really began. So not only was it Shauna, there was also about eight other people. Two camera men, a Director, a Producer, a guy in charge of lightning/sound etc Before I knew it I was miked up and standing in front of the cameras….