The Irish Open Pro Am – Part 2

The Irish Open Pro Am – Part 2

Straight down the middle can not be held responsible for injury caused by reading the following. Beware names will drop.

So where was I?

After getting introduced to the other Am’s in my Pro Am group, (two really nice fellas, Fiachra and another so nice I can’t remember his name!) Paul from vocal explained to us why we’d been miked up and what the camera’s would be doing.

“Okay guys, the plan today is BMW want to document how your experience goes. As you are aware you’ve been miked up and will be live for the next six hours. Don’t worry we’ll try not keep the cameras in your face but it’ll be worth it in a few weeks when we will have a nice little ninety second film for each of you”

Six hours recording for ninety seconds, That’s a lot of editing and bleeping out if I didn’t play well.

So from sitting in the stands like an ordinary “patron” fifteen minutes earlier I suddenly find myself with two cameras on me being asked to explain what it meant for me to be there today and why I was Ireland’s most driven golfer. Cue all the cliche’s:

I just couldn’t stop talking,,,,, But I suppose ask me anything about golf and that’s normally the reaction. 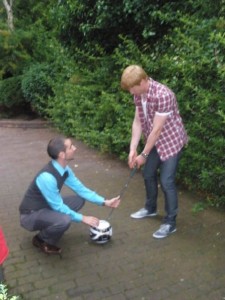 To name a few. Funny situations, all good fun. But when Shane Lowry walked by where we were getting interviewed and gave me the “who’s your man” look, the butterflies in my stomach woke up!

So after all the basic interviews were done it was roughly 1110, three hours to kick off! Paul gave us the all clear to wander around and do whatever we wanted and we were to meet back up on the range at 1300.

The range… I’ve mentioned in previous blogs that this is where I spend most of my time if I go to a tournament, watching all the Professionals go through their routines and warm ups.

This was when I started to feel like I was at The Oscars. We flashed our credentials and walked the red carpet, no it wasn’t lined with movie stars but in my world they were as good as.

A who’s who of European Tour stars. I felt like a kid in a sweet shop. I didn’t know what or who to look at, the sound, that strike of a golf ball gave me goosebumps, All the reasons I started playing and why I loved this game so much basically my teenage years flashing through my mind.
And then we spotted him. The Masters Champion, unfortunately he wasn’t wearing his Green Jacket, but we were able to stand no more than three yards from him and watch him do his thing. Myself and Kenny were both baffled at what he was doing, we both would think we had our fingers on the pulse when it came to modern equipment and practice drills but this was all new to us. 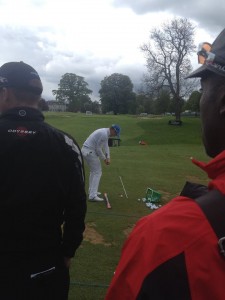 After watching him for about twenty minutes only one word can describe him, “Focused”. He was so into what he was doing. Nothing around him phased him, no small talk, just work. I know its something that gets lobbied around when someone wins their first major, but Danny Willett will definitely win more majors.

We walked up and down the line, both with sore sides from the elbow nudges that followed.

“Rob, my god did you see that”

We would both consider ourselves good to decent players but watching these guys hit the ball could either do two things, totally destroy our confidence or motivate us. Hopefully the later was the effect we both felt.

Then out of nowhere this strange feeling came over the range, Heads turned, people whispered, pointed… There he was, well so we thought. I’d never seen a golf bag get so much attention. Rory’s caddy JP had arrived on the range and placed his bag down. People started to hover. Waiting patiently. Five, Ten, fifteen minutes passed still no sign of him.

Then all of a sudden, THIS ROAR erupted, it was like Ireland had scored a winner in the last minute, We looked around still no sign of Rory. But then the roar turned into a chant:

Your man from X Factor, Niall Horan. Biggest reaction of the day. Now my niece is a huge fan of 1D so all I could think of when I seen him was getting a photo of him to make her jealous, who could ask for a better uncle! I had one simple job to do:

“Hi Niall, my niece is a big fan, any chance of a photo”  Sounds easy right. I’ve never seen a guy been hassled so much and I was that close to leaving it…. 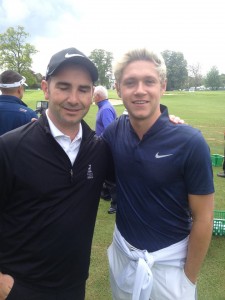 After all the fan’s calmed down, the main event arrived on the range, Rory. Myself and Kenny got ourselves into prime position. And just watched. Not much was said, the best golfer on the planet two yards from us. He slowly went through his bag, few wedges, nine irons, six irons, four irons, three wood, then BOOM.

I have never seen anything like it. I’ve seen Tiger in his prime hit a driver, but what Rory did right in front of us that day was borderline ridiculous.

Picture the scene. He’s directly in line with a forty foot tree, the tree is about two hundred and fifty yards away, a good drive for most. His ball was rising as it went over the tree. We thought the first one was a fluke, then he did it again and again and again. The strike, the power were impressive, but the trajectRORY was actually scary.
Rory on Range

Before we knew it, it was 1245, time to get the boots on. Back into the real locker room. Kenny grabbed the bag and we headed to hit balls beside the big boys. Walking across the range the camera’s spotted us.

So I started a few stretches, body movements, getting the blood flowing you know. Was just about to hit my first shot. Tap on the shoulder.

“Rob that was brilliant, any chance you could do it again, we’d like to get it from a different angle”

The few days previous I had been hitting the ball so bad, I mean real bad. Actually losing sleep over it. I kept having this vision of my shot off the first tee and having to shout…

So I slowly started to hit a few shots, felt ok, then that quick hook, Snap. Snap.

“Rob, just get your weight onto your left side and hold it there”

Thirteen is normally an unlucky number but these thirteen words Kenny said to me, made my day. I started it hitting it good, nearly great again. Went through the bag like Rory did and was nearly finished when Kenny gave me a wedge.

“Lets do a little warm down Rob, keep it on your left side”