You are here: Home1 / Tiger and Jordan

Tiger & Jordan, side by side!

Everywhere I click or in any magazine I read all I can see is Jordan Spieth being compared to Tiger Woods. How everytime he does something he’s getting closer to what the Tiger achieved, but personally I think it’s all a bit premature. Yes, he had a great year last year but if you stop listening to the media for a second and actually really compare the two on their first four years on tour Jordan is not in the same league as Tiger.

I think it’s like comparing Manchester City to Manchester United. Insulting really, what United did over the past 20 years in football will be hard to repeat and although City have some success recently they are no United. 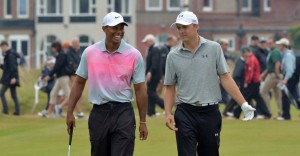 If we look at Jordan’s first four years on tour we have to say it’s been successful, but,

Did it grab the imagination of the World?
Did it change the way the sport was viewed by the general public?
Has there been a queue of sponsors looking to host tournaments?

No, the tour just keeps on rolling.

If we look at Tigers first four years we go WOW!

Simple as that, he changed the game. Viewing figures exploded, kids all around the world wanted to wear the red Nike T-Shirt, established players had to look at their games and totally rebuild just to be even in with a chance of going to the ball that was the PGA tour with Tiger. 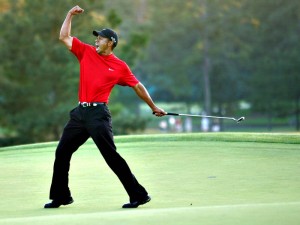 We could compare medals straight away and we will get to that but the one stat that jumps out to me over both of their first four years,

That’s a significant difference. Does it show when the going the gets tough Jordan just folds or when his putting deserts him he struggles? Tiger was a machine, he was so so good that his bad week would usually be a top 25. This was evident in the Majors. Tiger played in all 16 available to him, but Jordan only got into 12. Again Tiger leads in cuts missed, none, Jordan had three. Tigers worst performance tied 29th.

Okay what about their medals. In other words how many wins have they notched up? Well between them over this period they won a whopping 28 times. So if Jordan is up there with Tiger he’s surely won at least ten of these? Nope.

Okay, no one really cares about tour events really anymore so what about the Majors. Between them again a spectacular seven. 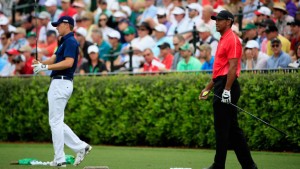 Yes, but Jordan could have won all four last year you might say, but what about Tiger at the same stage of his career? The year 2000, possibly the greatest all four Major performances by any human being to date, three wins and a fifth place finish. That trumps Jordan’s 2015 all day long if you ask me. Historians might argue Ben Hogan winning the first three in 1953 matches Tiger but it’s very hard to compare as the game was so different.

2015 was a sensational year for Master Spieth, as the great Peter Alliss would call him, but when you go side by side with Tigers 2000 it doesn’t come close. Tiger played 20 times, won nine times and missed no cuts. That’s a win rate of 45%, one I don’t think we’ll ever see again. Jordan played 25 times, won five but missed four cuts. An incredible win rate of 20% but without repeating myself nowhere near as good as Tiger.

All-in-all, let’s hold off on the comparisons. I’m sure Jordan himself knows he’s not even in the same category as the great one. But only time will tell….. 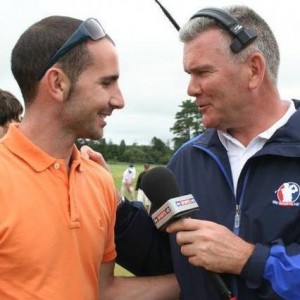