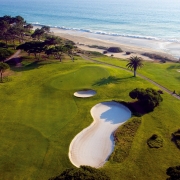 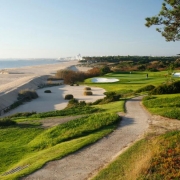 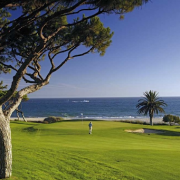 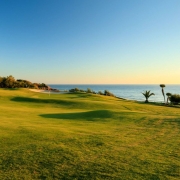 The Ocean Golf Course features undulating fairways which run alongside nature reserve, before leading gently down to the shores of the Atlantic
The front nine are located on a slightly hilly land which characterises Vale do Lobo, surrounded by pine trees with sea view from several holes.

The back nine in particular are characterised by spectacular ocean views, with some holes almost stretching down to the beach. On reaching the brow of the hill on the 11th, players come suddenly upon a sight fit to take the most concentrated golfer’s breath away.

The Ocean Golf Course at Vale do Lobo resort features undulating fairways which run alongside nature reserve, before leading gently down to the shores of the Atlantic. Its signature holes are two challenging and spectacular Par 4s, the 11th and the 14th, which treat golfers to some of the most spectacular views in the Algarve – and the Par 3 15th, which runs alongside the beach. The Ocean Course is composed of two of the original 9-hole golf courses designed by Sir Henry Cotton, which were opened in 1968 and 1972. His plans for the merged course became reality in 1995.

The Ocean Course in Vale do Lobo is situated right on the very edge of the coast line and offers some of the most stunning views in European golf along the shores of the Atlantic. You can stay on-site at the incredible Vale do Lobo Resort and play multiple rounds at both courses at the resort with reduced green fee rates which is a great option