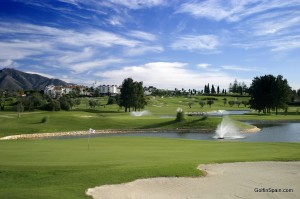 During the last decades, Mijas Golf has become one of the most popular golf complexes in Europe, known by the outstanding condition of their courses and the friendly atmosphere and excellent service provided to the clients.

The courses, Los Lagos and Los Olivos, are situated in the valley of Mijas, north of Fuengirola, only twenty minutes from the Málaga international airport and Marbella, and 3.5 kms. from the sea.

Keeping the original design of Robert Trent Jones Sr., the course has been totally refurbished in 2012.

With its 6,536 meters, this course is the larger of the two in Mijas Golf. Keeping the original design of Robert Trent Jones Sr., the course has been totally refurbished in 2012. Los Lagos is a course with soft slopes, wide fairways and few forest trees obstacles, but defended by many bunkers and not less than nine lakes, from which the course gets its name, eager to trap each and anyone’s ball.

The greens are large and flat with sensitive undulations and the wide tees can be accommodated to reduce or enlarge the difficulty to choice.

Los Lagos is a course suitable for kind of handicap players, being one of the most famous commercial courses of the Costa del Sol.

Designed by Robert Trent Senior, the main feature which distinguishes this course from Los Lagos is the abundance of trees – hence the name – and its smaller size, as well as fewer water hazards.

The greens are smaller, undulating and well defended. Although both are the work of the same designer, there is no doubt there are interesting contrasts between the two courses: if Los Lagos are based on hazards of water and sand, Los Olivos is strategic narrow tree lined fairways and elevated greens

Los Olivos is a course best suited for players gifted with a higher technical ability and precision in their game. 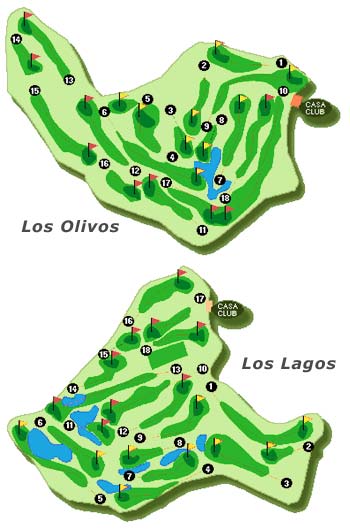